Legend has it that when the twelve lost Crystal Skulls of Atlantis are recovered and reunited – it will signal the beginning of the ascension of Mankind to the Divine realm.

Crystal Skulls have captivated people’s imaginations for many years, and for good reason. Crystals are widely used for empowering and healing in a variety of ways, as well as enhancing meditation, balancing emotional states and restoring inner-harmony. Ancient Masters understood the power of crystals to focus and manipulate energy, as well as to channel energy and psychic information at incredible bandwidths (Our computers do something similar via the silicon chip which is a crystal).

It has long been held that the early Atlanteans were highly evolved beings, with technology and a connection to spirit that is far more advanced than that which we possess today. As lightworkers raise their energies, these technology, abilities and tools will be once again available to mankind. Atlantis is rising!

At one time Atlantis had 12 ancient temples, each containing a crystal that had been skillfully crafted into the shape of a human skull. These Crystal Skulls served many functions and were incredibly powerful. They were responsible for generating and storing wonderful energy and wisdom for the civilization. They induced profound visions and psychic experiences. They have consciousness and can communicate telepathically. These 12 skulls have been hidden until mankind can handle this great energy. They are now allowing themselves to be found. Each holds the mastery of one of the 12 temples of Atlantis. As we work with the crystal skull energies, they lift up our world and our lives.

Crystals are not crafted into skulls for symbolic or aesthetic reasons. The Ancient Atlanteans understood the power of shape resonance. Resonance is a phenomenon that has been recognized in modern physics for years. Frequencies that are equal transfer energy between one another. We tend to only think of resonance as happening between frequencies- but ancient wisdom held that there is also resonance between similar shapes. In ancient Egypt, if someone broke a bone, cracked their skull for example- they would sleep with an undamaged skull next to them, to heal their own skull with shape resonance. It’s in this way that ancient mystery schools healed objects with undamaged versions of the same object. Crystal skulls send vibrational information to your head based on the principles of shape resonance. This impacts the pineal gland as well as the crown and third eye chakras. Just being near one of these skulls is like a massage for the pineal gland.

Just as computers can communicate all over the world, so the crystal skulls of today can tie into the great Atlantean skulls. The original skulls hold light information, consciousness and energy of the most elevated time the earth has ever known. It is said that crystal skulls facilitate higher dimensional downloads and enhance psychic abilities, while simultaneously removing obstacles and blockages. 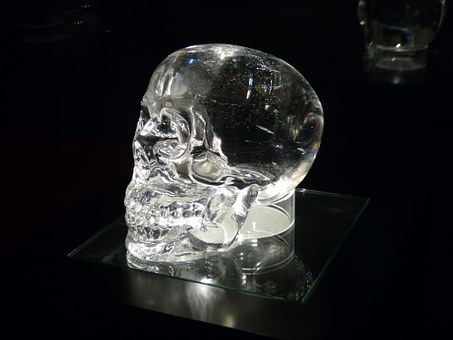 The modern crystal skulls tie together the key elements of renowned sound-healer Jill Mattson’s new work: activating and harnessing the powerful energies of Ancient Atlantis, and accessing and changing our Akashic records. Jill has personally activated each of these crystal skulls and connected them to the 12 original Skulls which housed the glory and the wisdom of the Golden Age of Atlantis.

Crystal skulls can be used in many ways:

If this topic interests you remember to tune into Jill Mattson’s You Wealth Revolution interview, first airing on April 1.

Jill has been on a spiritual quest since an early age. She spent her youth as a devout Christian, mother and charity worker. Jill naturally grew to embrace almost all faiths and was drawn to the profound healing energy of Sound & Music and Vibrational Energies that can mold and manipulate subtle energy to a multitude of benevolent ends. Jill has had soul-shaking physic encounters and learned to Channel many entities. She has been able to revisit past lives and learn many things from earlier experiences and Old Masters.

Jill believes her most enlightening accomplishment has been to combine her expertise in Healing Sound & Music vibrational frequencies with her spiritual awakenings. More recently Jill has found that certain crystal tools – such as quartz crystal instruments – have made her techniques and discoveries much more powerful. Mattson has focused on sharing lessons and information with other people who share a strong spiritual quest.

Jill feels she has been directed to study Antiquity; old civilizations and traditions. She is especially dedicated to Ancient Egypt, Old Hebrew, long lost healing techniques from a variety of traditions… and Star Codes. Most recently she has been working on the coming reawakening of Atlantis.

She has written 4 books and composed 11 original musical albums. All her works concern Sound Healing Energy and Spiritual discoveries and ways that people can use these to improve their lives. She also has produced dozens of instructional videos on a wide array of topics – all centered on what she calls Total Wellness and Enlightenment based on Sound Energy/Special Vibrational Frequencies.

If you enjoyed this article, you may also be interested in: https://www.youwealthrevolution.com/blog/angelic-messages-angel-news-28th-edition/