Occasionally lifting the characteristic monocle for a clearer view of the Senate Banking Committee’s hearing for the astounding Equifax data breach, Rich Uncle Pennybags — perhaps better known as the ‘Monopoly’ man from the classic board game — carried out an epic photo bomb to raise awareness of the dearth in consumer rights against the monolithic financial industry. 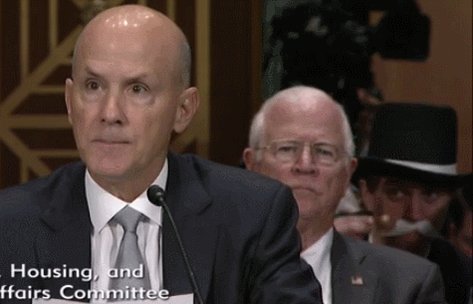 Complete with black top hat and impeccably-mustached, Pennybags observed the proceedings quietly from the gallery — occasionally peering through the single lens or blotting sweat from his brow with enormous paper money — as Equifax CEO Richard Smith testified to the Senate, taking full blame for an inexcusable and embarrassing data breach of the personal information on more than 145 million people.

Of course, given Wednesday’s appearance comes on the heels of nearly identical proceedings in front of the House Energy and Commerce Committee on Tuesday, it wasn’t surprising the embattled Equifax head failed to notice the cartoon board game heckler a couple rows back.

Pennybags, in actuality, was Amanda Werner of Americans for Financial Reform and Public Citizen, who agreed to the fitting photobomb and publicity stunt to bring sharp attention to forced arbitration — described as Big Banks’ ‘Get Out of Jail Free’ card, as it allows shirking of responsibility and accountability for swindling customers.

“Arbitration is a rigged game,” Pennyb—  … Werner told CNBC in a statement through email. “Bank lobbyists and their allies in Congress are trying to overturn the CFPB’s rule so they can continue to rip off consumers with impunity.”

Werner also distributed mock Monopoly ‘Get Out of Jail Free’ cards as part of the stunt.

“The Senate leadership is pushing to roll back the U.S. Consumer Financial Protection Bureau’s arbitration rule using the Congressional Review Act’s (CRA) expedited process and has until early November to act. The rule allows consumers to join together in class actions to challenge wrongdoing in court. Widespread wrongdoing and negligence at Wells Fargo and Equifax and their attempts to evade legal accountability using forced arbitration ‘rip-off’ clauses have transformed the issue from an obscure regulatory debate into a leading national story.