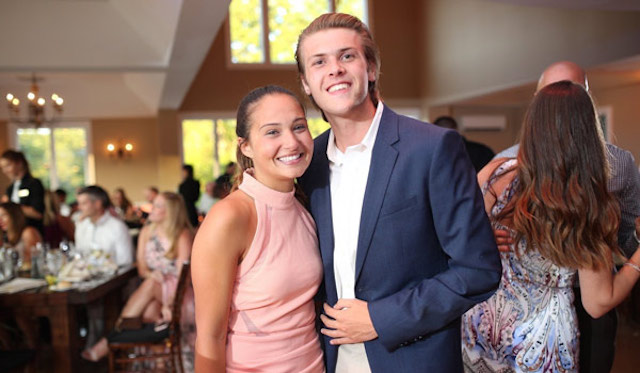 This couple may not look much like Owen Wilson and Vince Vaughn, but they certainly have a knack for crashing weddings.

The dynamic duo showed up at the reception of Karen and Michael Tufo and proceeded to become the life of the party; dancing for every song, posing for every photo, and just being a lot of fun in general. Though the newlyweds and the bridesmaids were unable to put their finger on who the bombastic partygoers were, they were too distracted by the festivities to try and figure it out.

They were later surprised – and delighted – to find a card in their stack of wedding presents that confirmed their suspicions.

The card had a dollar bill taped to the inside, along with a polaroid of the mystery couple, saying: “1) Congratulations! 2) Sorry for crashing your wedding! 3) Best of luck!”

Karen later posted a photo of the card on social media, saying that it was the best gift she could have asked for and that she wanted to find the couple so she could shake their hands and buy them a drink.

The New Jersey couple was later revealed to be Carly Wolfson and Ritchie Berry: two youngsters who had actually agreed to crash a wedding as their first date.

Ms. Tufo has since befriended the two youths and demanded that she be invited to their own wedding – assuming they ever get married.

(WATCH the video below)